skip to main | skip to sidebar

A RAT MUST CHEW - GARY LOVISI 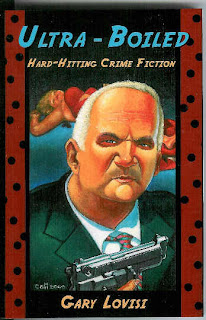 One of twenty-three stories in ULTRA-BOILED by Gary Lovisi (Ramble House, 2010)

Jimmy Dongen was a Staten Island wise-guy with his dirty hands into more dirty crap than even he could keep track of. Anything and everything to make a buck and not just gambling and other soft vices, but nasty stuff like teen-age hookers, drug dealing in schools, selling guns to kiddie gangs. The guys under Jimmy saw him as a greedy fuck, the guys over him saw him as a greedy fuck who brought in the cash. He was a good earner so they all put up with Jimmy Dongen while he tried his best to smart-ass double-cross them all when they weren’t looking. He figured he’d end up with everything he ever wanted. I don’t think he even knew all of what he wanted---he just wanted.

My name is Vic Powers. I came into it originally back in the old days when I’d been on the job. Before they threw me off the force for being ‘unstable.’ Hell, I wasn’t unstable, I was just damn angry that a lowlife creep had killed my partner, Larry, and I wanted to do something about it. Larry was the best damn friend I ever had. The best damn cop I ever knew. Damn right I was angry. I was fit to be tied! But I wasn’t unstable, least ways any more unstable than I’d ever been. But then again, I guess I could see their point, and it probably all worked out for the best. I wasn’t cut out to be a cop. Not the kind of cops they want. Yes-men, ass-kissers, sell-outs and politically correct rats---a lot of them no better than the criminals they are supposed to arrest.

Well, all that was a lot of water under the bridge now, but over the years Jimmy Dongen had moved up, turning into one of the biggest of the bad guys. But he’d made a lot of enemies along the way.

He told me once long ago, after I’d saved his ass, that he wanted to go straight.

I told him he was full of shit.

He had acted all serious about it back then.

I just looked at him and said, “Rats must chew, that’s just the way it is, Jimmy.”

He got all upset, thought I was calling him a rat.

There is a difference.

Then I told him that to live a rat must chew. Rats -- the four-legged kind, that is – have huge incisors that keep growing in their mouths and if the rat doesn’t constantly gnaw at things, constantly chew, cut and grind with those teeth to wear them down, the damn teeth will grow right into the rat’s brain and kill it.

“Nice way for a rat to die,” Jimmy had said.

Then Larry and I cuffed him and brought him in.

Well, that had been a long time ago. Like they say, a lot of water under the bridge, a lot of blood too. Now Larry was gone and I was on my own.

Now I was a two-bit no-one in a world that had dreamed me out of its dreams a long time ago. So I did the next best thing, I hung in and survived. I did my best to make it day to day. Trying to beat the odds but coming up craps with every throw. In the meantime I never dared to hope.

It was after Larry had been killed, but before my wife, Gayle, had been murdered. That’s how I usually remember events in my life, I date them from who it was who was close to me -- and when they were taken away from me. Killings, murders, my partner, Larry, my friends, my women, my enemies, my wife...

Anyway, Gayle was still alive back then and we were trying to have a real life. I was playing the hubby and loving it. Thinking of opening an office again, maybe a husband and wife P.I. team? A dream I shouldn’t have let enter my mind.

He was on the run.

The cops -- crooked and otherwise, the mob, a Jersey biker gang that dealt drugs, an upstate Aryan Separatist group that paid Jimmy a lot of good money for some very bad guns. They were all after Jimmy and I was in Jimmy’s car parked under the West Side Highway while he was telling me all this crap.

I said, “Why, man? You had it good; you could have stopped the crap, taken it easy. You play so many games, so many sides against each other you were bound one day to get caught in the middle.”

“I know, Vic,” he said. “I guess it had to happen sooner or later. You know how it is. I got to do what I do. I can’t stop. I could never stop. Once I started a life of crime, Vic, once I started playing The Game, I just couldn’t stop it. I love it too much. Now I know there’s only one end for us all, eventually.”

“You know all this shit and you still fuck around.”

“Yeah, I know all this shit, and it doesn’t help me by knowing it.”

“Not if you don’t do anything to stop it, Jimmy.”

The gun slipped into my hand.

I pressed it up against Jimmy’s temple.

Jimmy’s eyes blew up into big circles of surprise, and then understanding.

I pressed the trigger.

He fell away from me.

I whipped the gun and placed it in his right hand, melding the fingers to the grip. Opened the door. Locked the passenger side as I got out of the car and walked away.

A rat must chew.

This was one rat that would never chew again.

BIO: Gary Lovisi is the editor of HARDBOILED magazine which he publishes under his Gryphon Books imprint. He is the author of numerous hardboiled and crime short stories and novels, as well as non-fiction books such as Dames, Dolls and Delinquents. His latest book is Ultra-Boiled (Ramble House, 2010) which collects 23 of my best and nastiest hard crime tales. You can learn more about Gary and his books at Gryphon Books.
Posted by Christopher Grant at 1:02 PM

This story practically tells itself. effortless in delivery, nuanced in the details and flow, authentic in the voice and POW a wonderfully simple and effective payoff. Nicely done, Mr. Lovisi.

Just like having a gangster whisper a tale in your ear, like a razor on the edge of a window, this is a classic story. It lacks all the pretension of many and has all the virtues of few.

i can see why you were so enthusiastic about posting this one. slick and authentic.

Two lives lived parallel. You're thinking, black and white, good and bad. Morality play with the eternal opposites at odds. That's the first part. The middle part jumps up and yells.Wait a second! Lot more than that going on here! And the last part does a slap behind your head and whispers in your ear,Be careful who you're backing. All rodents gotta gnaw -- even Vic. No heros, no backslaps, no medals here. Just NOir. Excellent.

The banner art is by the multi-talented Walter Conley. Copyright 2011

Crimes Committed By Yours Truly